Looking for something a little different for your graphic novel collection? Or perhaps a series for the budding artist or comic enthusiast in your family? We’re excited to introduce you to the delightful Hilda and her adventures in the Norwegian countryside. 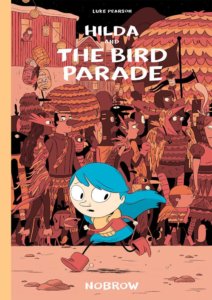 Hilda and the Bird Parade by Luke Pearson (Nobrow Press, 2012)
Graphic Novels / Fantasy / Kids and YA

Why We Love It: Hilda is a young blue-haired girl who knows some important things: every day is an adventure, the world was made for exploring, and the hills are full of weird and wonderful creatures who need befriending.

Welcome to the city of Trolberg.

In the weird, wild, wonderful Norwegian countryside, Hilda stuffs her satchel with necessities (like her sketchbook and pencils) and tromps through forests and mountains and streams and caves, meeting trolls and gnomes and monsters and critters of all kinds.

Standing out from American graphic novels and Japanese manga, European comics have a tradition of oversized volumes that deliver their storytelling through a rich aesthetic experience. Luke Pearson’s Hilda series is a beautiful example of these hardcover wonders – the illustration, colors and even the hand-lettering are rendered in vibrant, expressive, immersive detail. And most importantly, they’re just plain fun.

The entire series is a joy to read, but Hilda and the Bird Parade turns the series upside down in the best way, forcing Hilda out of her beloved wilderness when her mother gets a job in the city. How will Hilda’s wanderlust survive in this new environment? Can she navigate the urban labyrinth the way she mapped the hill country? And will her new talking bird friend ever remember how to fly?

Hilda is currently being developed as a Netflix animated series. Will it measure up to the charming, wonder-filled comics? Let’s hope so… but either way, these are bookcase treasures that are calling you to explore. Don’t miss the adventure!

Here’s the first preview footage of the Hilda animated series:

You can order your own copy of Hilda and the Bird Parade here.