Rabbit Reads: The Song of Glory and Ghost

Every now and then, we like to recommend a great audiobook for your listening pleasure. Our latest pick comes from one of our favorite authors, N. D. Wilson, author of the 100 Cupboards and Ashtown Burials series! (Please note that this is book 2 in his newest series Outlaws of Time… so if you haven’t read the first book yet, beware of spoilers!) 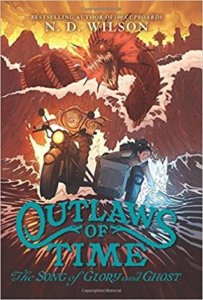 Why We Love It: It’s not often that the second book in a series is even better than the first. And it’s not often that the sidekick of one book becomes the hero of the next. N.D. Wilson’s Outlaws of Time: The Song of Glory and Ghost checks both those boxes. What’s interesting then about reading it as an audiobook is how the male narrator of book one has the challenge of embodying the female heroine of book two.

Read by MacLeod Andrews, the Glory and Ghost audiobook holds the honor of being the only book I listened to (or read) twice in 2017. I’d started reading the hard copy of the first book in the series when it came out a couple years ago, but hadn’t actually finished it. When I knew the second book was on its way, I borrowed the The Legend of Sam Miracle audiobook from the library, and listened in preparation for book two.

N.D. Wilson’s Outlaws of Time books are rip-roaring adventures, full of wibbley-wobbly, timey-wimey…stuff. There’s a boy with snakes for his arms, a black-hearted villain, and a time traveling priest. But most of all, there’s Glory. She starts off as just a girl, but she’s a girl with fierce passions: she thinks the ending to her favorite book—the ending in which the hero dies—is the best one, because the hero deserted his sister earlier in the story. That’s the kind of girl Glory is: she holds even her fictional heroes to the kind of standards she has for herself. But it’s in the second book, The Song of Glory and Ghost, that Glory truly becomes the woman I love. She grows, she deepens, and she becomes Glory Hallelujah, Mother Time, whose clear eyes see the path that must be, and who has the resolution to see the path through.

I’m looking forward to the wrapping up of the Outlaws of Time books with The Last of the Lost Boys due out in April, because though Glory knows her path, I don’t see it clearly yet. When I saw N.D. Wilson at Hutchmoot last fall, I thanked him for creating Glory and he said that he’d tried to write a friend for his daughters. I can’t imagine a better friend for them — after all, she’s already become one for me.

The hardcover edition of The Song of Glory and Ghost is available in The Rabbit Room Store.