Albums That Shaped Us: Careful Confessions

I have found through the years, as I am sure many have, that some of my favorite albums are those connected to a live performance. The album itself tells a story, but the subconscious narrative underneath is the memory of what I shared in a room with the artist that first time.

In the spring of 2004, Maroon 5 had just made their somewhat lyrically scandalous splash among college students around the country. When a few friends and I heard they were playing in the gym of a small nearby campus (…the band’s hard work in that era seems to have paid off), we made the trek to see the show.

We stood through the sadly forgettable first opener, and then a girl took the stage with her piano and small backing band. She opened her mouth to sing, and as the jazzy-pop melodies tumbled out of her mouth, mine fell open. I need to know this person, I thought. I need this music. This feels like ME. Judging by the pictures I took, I enjoyed Maroon 5’s set after hers was over, but I remember none of it. My goal was to get to the end of the show so I could reach the lobby merch table.

She was there when I dashed out, and she introduced herself as Sara. Her freshly run independent album, Careful Confessions, sat in small stacks on her table. I wish I could remember the specifics of what we said to each other—I probably gushed, trying to articulate what had just happened to me. I may have tried to describe how the way she wrote and sang had given a key to sounds in me I had never known how to let out. How if I wrote more songs, they would likely sound like hers. How she had illuminated a part of my musical puzzle that I didn’t know was missing, interlocking with pieces that artists like Jennifer Knapp and Plumb and Jars of Clay had begun to stir in me. In reality, I am sure my 19 year-old self was nowhere near as coherent as all that. I bought the CD, she signed it, and we took a picture together. I was floating and ecstatic and couldn’t wait to get back to school to play and write. 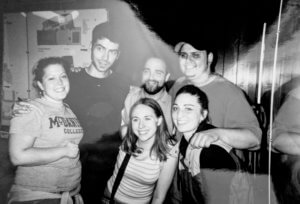 2004, when we all looked a lot younger and slimmer and made different fashion choices, and I didn’t know which camera to look at. Javier Dunn and Josh Day (back L, center) were members of Sara Bareilles’ band for many years.

My copy of that Sara Bareilles CD is scratched to high heaven. It didn’t leave my car CD player for months. I knew—and still know—every word and vocal inflection. I wondered at her wordplay, at how she carried her songs on the piano, at her soaring long-held vocals at perfect moments. The delicate melancholy floated around my brain unceasingly, starting with the opening major seven and nine chords preceding, “Something always brings me back to you, it never takes too long” on “Gravity.” It continued into “Undertow,” with the bass line intro under a dejected vocal and then descending, suspenseful chromatic piano chords before the full band arrangement kicked in.

The punchy, syncopated beginning to “Love on the Rocks” was reminiscent of “Benny and the Jets” (which I probably didn’t even know at the time—in some ways, Sara Bareilles became my education on Billy Joel). It gave way to the rhythmic acoustic guitar of the next two songs, setting up a musical familiarity with melodies I just couldn’t stop singing. The top note in “Have I already tasted my piece of one sweet love?” served as a constant playground of flipping into head voice and figuring out how to do such things quickly.

“Fairytale” was an obsession of mine—she had taken my beloved princess folktales and flipped them on their heads, defiantly singing against age-old ideals of femininity. The sass and bravado made its way into my brain in both the way I belted out the song in my car and the copycat versions I started to make up with different lyrics but much the same chord structures and patterns.

This first time-capsule of an independent female trying to make music that didn't quite fit in the boxes set before her changed my life. I felt understood, seen, inspired. It gave voice to musical parts of me I hadn't yet found.

The album contains seven studio tracks and ends with four live recordings of other songs. They are imperfect. But I was utterly delighted to be let in on performances like the Hotel Cafe shows I read about and dreamed of attending across the country. In those tracks, the loneliness of “City” gave me an endlessly emotional ballad to sing on late-night drives. I pondered the glimpse into the darker side of performing for a living and what I would do in that position. I wondered who sang the harmony parts at those shows and daydreamed about doing so.

“Red,” with its bouncy energy and encouraging sentiment, became a watershed song for me. I served at a week-long summer church camp for years, and it always had a counselor/staff performance night. I had played Careful Confessions for many people at that camp, resolutely assuring all the fellow music-lovers that they would love it, and a group of younger girls had indeed joined my unofficial fan club. I grabbed a few of them who also loved to sing and play so that we could figure out a performance of the song. Until this point, I had always recruited someone older and more experienced to play guitar or piano for me, passing the job of determining chords and arrangements to more capable musicians. For this performance, for the first time, I figured out the chord progression by listening, tested it with the girls, and played it on piano myself. It was clumsy. It was messy. But, with a girl playing guitar and three of us harmonizing together as we belted out the line “How you love is who you are,” something changed. We were a group of passionate young women who stepped out of our comfort zone of having an older guy play for us. We took it into our own hands. For the first time, I could influence what happened on that stage instrumentally. I knew I wanted to do it again and again and again.

Careful Confessions isn’t a perfect album. Her subsequent records pursue greater depths of songwriting and musicality—she re-recorded some of the songs from her debut for her first label album, and her later record The Blessed Unrest was nominated for a Grammy. But this first time-capsule of an independent female trying to make music that didn’t quite fit in the boxes set before her changed my life. I felt understood, seen, inspired. It gave voice to musical parts of me I hadn’t yet found. It gave me the courage to press into the role of songwriter and pianist, no longer only a girl who sang songs other people wrote. The tattered lyric booklet and CD will always remain on my shelf for when I need a reminder of what it felt like to imagine that kind of life for myself and to start tiptoeing into it.

Jenna Badeker is a musician and writer currently living in Maryland. She is half of the duo Wild Harbors with her husband, Chris. She also has a sweet dwarf rabbit named Duncan who lives in her living room... which makes it a literal Rabbit Room.