Have you ever tried to cook ten pounds of pasta all at the same time? Add a guest list of thirty people plus two bands of hungry musicians, then imagine trying to cook ten pounds of pasta in water that refuses to boil without experiencing even a pulse of anxiety. Miraculously, the water boils (after you frantically separate the unyielding noodles into three separate pots) and there’s more than enough penne for everyone attending the event, plus extra penne which you later find has melted together at the bottom of the cookware.

The night isn’t a blur, exactly—it starts and stops. You meet a man who’s lived in Nashville since he was a kid, a woman who came for school and stayed for one reason or another, a girl who moved to England and then moved back to embrace the joys of culture shock. Friends are there, strangers are there, you make sure there’s toilet paper in the bathroom and you triple check that you didn’t forget to bring all necessary capos, tuners, picks and instruments. 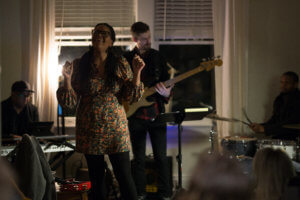 Between greeting folks and hearing blips of their stories and making sure there’s enough cheese on the charcuterie table, you realize that moving between the roles of Martha and Mary is not unlike being a windshield wiper that sticks to one side but continues a twitchy, almost laughable attempt at full function. And you realize that the creation of space and the pursuit of community are intensive work, and at the same time are almost painfully simple.

We conceptualized Supper & Songs out of the desire for a community of supporters and fellow musicians in the place where we live, the place we call home, that feeds us. As people, we have community. As a band, playing live shows in Nashville has, at times, felt like trying to dig our roots into the soil of the Bermuda Triangle. Trusting in the power of presence and consistency (and food—as a band rule, we never underestimate the power of food), we’ve now pulled together the resources offered to us so we can offer others some kind of togetherness as we search for it ourselves. 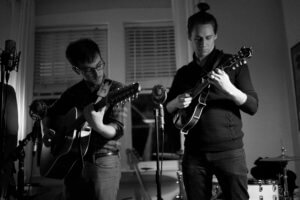 Funnily enough, scrambling from kitchen to guitar-tuning and back again can feel like a perfect storm for isolation, regardless of the goal for unity with others. It fades, or cuts in and out, as we play the music we’ve set out to share and welcome our friends onstage after us (the “stage” being a living room rug and our friends being the outstanding Liz Vice, in this case). And we notice people are really listening to the music and to each other, and really receiving, and that beautiful fact is the thing we receive—that’s where the togetherness begins. It reminds us that success isn’t a matter of flawless vocal performance or a diverse enough charcuterie selection. It happens with or without our competent hosting or punctual cooking, as long as we bring ourselves and as long as the listeners do the same.

All that is to say, the first Supper & Songs was indeed a success—not because everything happened more or less according to plan or because the house didn’t abruptly collapse, but because people came with open hands and kept them open for the duration of the evening. We move forward excitedly, humbly, and resolved to keep our own hands open. With another Supper & Songs event around the corner, we move forward having been reminded what it is to give and receive. 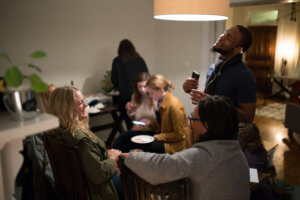 The next Supper & Songs show will take place May 14th. Tickets are available here.

You can learn more about Supper & Songs and The Orchardist here.

And be sure to check out Liz Vice here.