The Misadventured Summer Of Tumbleweed Thompson

[Note from Joe Sutphin: A few years ago my buddy Sam (S.D. Smith, author of the Green Ember series) asked me to do a few doodles for a serial that was running on Story Warren. It was a great little Mark Twain-like story about an everyday kid whose world is turned upside down the day that a shyster’s son comes to town. The story was tentatively referred to as Tumbleweed Thompson and was written by Glenn McCarty. I met Glenn later at a children’s conference in Charlotte and we became quick friends.

Glenn texted me sometime last year to gauge my interest in revisiting the story of Tumbleweed Thompson and to tell me of his hope to put together a Kickstarter campaign to self-publish the book. Knowing what a great storyteller and all around great guy Glenn was, I certainly was interested. We talked more about it at Hutchmoot last year and set our plans in motion. I’ve now illustrated the cover and Brannon McAllister has created the cover layout and title design. I’ll also being illustrating the interior of the book, with Brannon doing the interior layout.

Now, with the Kickstarter having launched this week, I asked Glenn if he would introduce our Rabbit Room community to The Misadventured Summer Of Tumbleweed Thompson. Here’s Glenn.]

Community. Collaboration. We pay lip service to these ideals often, but it’s only in the presence of the incarnated form of them that we can truly appreciate their value. I’m not sure I would have come to this realization as keenly as I have were it not for my experiences working on The Misadventured Summer of Tumbleweed Thompson. This week I launched a Kickstarter campaign for the book, a frontier adventure for young readers that has its origins at Story Warren, where I’ve published several short stories featuring the main characters.

It’s not an exaggeration to say this book wouldn’t exist without The Rabbit Room. Over the past three years that the book has taken shape, I’ve crossed paths with dozens and dozens of folks who have embraced, encouraged, exhorted, challenged, and inspired me with a vision of the faithful Christian artist that has helped me get this close to the finish line. 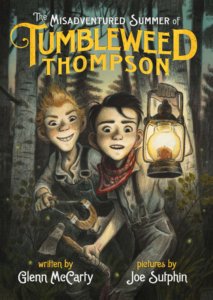 Like many of you, I’m by nature a bit of a lone wolf. Give me a laptop and a quiet room, and I’m cocooned in perfect contentment. But when you’re writing a novel, which is pretty much like building a house by yourself, this sort of bravado is fool’s gold. The voices of self-doubt, what Steven Pressfield calls “The Resistance” in his book The War of Art, seem to grow louder with every passing moment alone with the work. But at every step of this journey, so many people have denied me the tantalizing chance to attempt this thing solo. They’ve grabbed me around the shoulders, yanked me close, and held me until I knew my work mattered, and that I needed to persevere to the end.

Here’s a scene for you. November, 2015. I’m just home from my second Hutchmoot, staring at my computer screen and about to lay out the story pitch for a Tumbleweed Thompson novel to six trusted collaborators (and Rabbit Room regulars) through video chat. Was I scared? Well, laying out a story pitch is the ultimate exercise in vulnerability, kind of like juggling chainsaws naked. But I wasn’t really afraid. I knew I was among friends. They were locked in and committed to help me take the story somewhere I couldn’t take it alone.

I owe so many of you a great big 'thank you' for helping to incarnate the truth that we're meant to labor in the field shoulder-to-shoulder, that we've got to hold each other up to face the light with clarity of vision and firmness of resolve.

Over the next six months, as I drafted the story, they held me upright, lashed me to the mast of my vision for the book, and wouldn’t let me get wrecked on the rocks of the Resistance. There’s so much of them in this book. And that’s the way it should be. Through the long days of revision, others have stepped in to offer critique and encouragement, over and over, even when I thought I had overstayed my welcome and over-extended their offer of assistance. It turns out that with friends and collaborators, that offer of grace through collaboration extends much, much farther than I thought.

When I made the decision last fall to Kickstart this thing, still more have stepped up to say how much they support the decision. Dare greatly, they said. Take the plunge. At a house concert a month or so ago, when my nerves were decidedly frayed, Jeremy Casella pulled me aside and gave time, wisdom, and encouragement about the whole process. It’s a crazy ride like no other, he said, but you’ll make it.

So here we are. I owe so many of you a great big “thank you” for helping to incarnate the truth that we’re meant to labor in the field shoulder-to-shoulder, that we’ve got to hold each other up to face the light with clarity of vision and firmness of resolve.

And now, it’s time to take the next step together. I can’t wait to share this book with you!

You can visit Glenn and Joe’s Kickstarter here.