Cash on Dylan, and the Vocation of Prophets and Poets: ‘Here-in is a hell of a poet’

An endorsement blurb from Johnny Cash graces the back side of Nashville Skyline, Bob Dylan’s 1969 album recorded in Music City: “Here-in is a hell of a poet,” said Cash. And for such poetry, a half century later, Dylan would receive the Nobel Laureate for literature.

But, really, so what? “What is poetry’s role when the world is burning?” asks no less a poet than Chris Wiman.

This question haunts me: When there is so much madness and violence, so much war and hostility and environmental degradation, is artistic expression anything but an indulgent diversion from reality?

Ironically, this concern informed Dylan’s early work: “The thing about rock’n’roll is that for me anyway it wasn’t enough,” he says. “There were great catch-phrases and driving pulse rhythms…. But the songs weren’t serious or didn’t reflect life in a realistic way.” Folk music “was more of a serious type of thing,” with “more despair, more sadness, more triumph, more faith in the supernatural…”

So, for Dylan, it was the poetry of the Americana folk tradition that gave him a greater capacity to see and understand reality. It was not a diversion from the burning, maddening world. It provided a capacity to see the world more clearly, and to envision new possible worlds.

In this way, Dylan is but one more poet in the line of the great poets such as Gerard Manley Hopkins who insisted that “the world is charged with the grandeur of God,” and that “Christ plays in ten thousand places.”

But the “seriousness” of the folk tradition is more than its sacramentality. The acoustic folk genre would inform an eschatological and prophetic edge to Dylan’s writing, too.  These edges would persist beyond and through Dylan’s electric rock-n-roll conversion, too.

Robert Hudson’s delightful new book on Bob Dylan and Thomas Merton plays out this “prophetic” element. In his monastic hermitage in the latter part of the 1960’s, Dylan’s music played for months on The Monk’s Record Player. Merton—himself one of the greatest voices for Christianity in America in the latter part of the 20th century—insisted that “Bob Dylan is one of the most important voices in the country.”

It’s worth noting that Merton made such a judgment precisely in the midst of all the burning and lynching and blood-shed of the 1960’s.

For Merton, says Hudson, the “prophetic” entails at least two aspects:  one, its capacity to tell the truth in a way that others are either unwilling, or incapable.  Commenting on the Nicaraguan poet Rubén Darío, Merton said: “All true poetic genius tends to generate prophetic insight. The poet cannot help but listen to awakening voices that are not yet audible to the rest of men.”

The “prophetic” also entails the capacity to see and speak before its time: “Poets and poetic thinkers,” said Merton, those “who construct myths in which they embody their own struggle to cope with the fundamental questions of life—are generally ‘prophetic’ in the sense that they anticipate in their solitude the struggles and the general consciousness of later generations.”

Merton saw Dylan, undoubtedly, as “prophetic” in such ways. And Dylan has been, undoubtedly, “prophetic” in taking up many of the particular themes of the Hebrew prophets of old.  The machinations of wealth and power do, after all, remain persistent through history. Thus Dylan, in both his folk and electric days will bemoan the plight of the poor, in the likes of “Ballad of Hollis Brown,” or “I Dreamed I Saw Saint Augustine.”

And yet his visions were not merely moralistic in an individualistic sense. Singing at the March on Washington—when Martin Luther King, Jr. would famously declare “I Have a Dream”—Dylan would lament the assassination of Medgar Evers in “Only a Pawn in Their Game.” But the villain was not simply the wicked choices of one evil man, but the manifestation of systems of hatred that give rise to such violence.

Or on war, similarly: Dylan would stand in unflinching judgment upon the military-industrial complex with “Masters of War.” But he had the capacity to see, with the Apostle Paul, that “our enemy is not flesh and blood.” Thomas Merton himself, in parallel, had written in a letter to Bobby Kennedy’s wife: “It seems to me that the great problem we face is not Russia but war itself. War is the main enemy….  Unless we fight war, both in ourselves and in the Russians… we are purely and simply going to be wrecked by the forces that are in us.”

Thus in Dylan’s great classic “God on Our Side,” which is first and foremost about the piety by which we justify our warring, the final prayer is to be delivered from war itself: “If God’s on our side, / He’ll stop the next war.”

Among these sorts of “prophetic” elements, judgment-laden eschatological strains are woven, too: pointing to some coming reality, desperately needed in the midst of the fires of history. “Blowing in the Wind,” “A Hard Rain’s Gonna Fall,” “Slow Train Coming”—all these evoke a longing for, and an assurance that, the broken will be set right: Dylan insists that there will be some coming judgment upon the burning, and upon those who burn.

So we return to the question with which we began—what is poetry’s role when the world is burning? And Dylan reminds us again that such a question is not a cynical one, but a prescriptive one.

It is quite possible for our artistic endeavors to be escapist, art that is, quoting Wiman again, “not steeped in the world.” But it is also possible—still quoting Wiman—to do “art better at theology than theology is.”

In other words: Precisely because the world is burning is there so much art to be done, so much poetry to be written, and so many songs to sing.

On June 7th at Lipscomb University, the first Tokens Show of the 2018 season will be a theological exploration of the work of Bob Dylan, featuring Pulitzer Prize winner and current U.S. Poet Laureate Tracy K Smith, Tobias Wolff, The New Respects, Matthew Perryman Jones, and the writer of this article, Lee Camp. 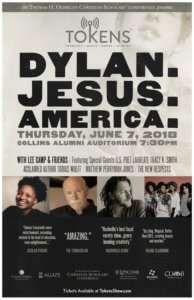 Learn more about the Tokens Show at their website and grab tickets here.

Lee Camp is Professor of Theology and Ethics at Lipscomb University in Nashville, Tennessee. He has published two books, Mere Discipleship: Radical Christianity in a Rebellious World (Brazos Press, 2003; 2nd ed. 2008), and Who Is My Enemy: Questions American Christians Must Face About Islam, and Themselves (Brazos Press, 2011), and numerous articles, and writes occasional pieces for the Huffington Post. He is also the host and creator of the Tokens Show, a live "theological variety show,” with occasional specials on public television and radio broadcasts.