Like me, some of you are old enough to remember the “funny papers.” There’s not a lot I miss about reading a daily paper, but I do miss the comics, and especially on Sundays. Back in the now-hallowed ’80s we’d wander home from church and sit on the porch ruffling through the full-color pages in search of Peanuts, Calvin & Hobbes, The Far Side, and B. C. while waiting for the pot roast and mashed potatoes to hit the table. I miss that. And what is Silly-Putty even for without the funny papers?

I’ve wished for years that the Rabbit Room had its own comic strip featuring a quirky cast of characters, but I was never able to envision exactly what it should be. Then, a few months ago, a light bulb went on. It occurred to me that over the past ten years, a whole community of quirky characters has developed all around me. And maybe, I thought, that was it. Maybe that was the comic.

I shot Jonny Jimison an email and laid out the idea—he was in. I’ve been a fan of Jonny’s work for a long time and it’s been a delight to feature his Getting Ethan comic strip here on the Rabbit Room (not to mention his Dragon Lord Saga graphic novel series). So this seemed like a perfect next step.

And here we are. I have no idea where this might lead, but Rabbit Trails are, at least, a good place to begin. Enjoy.

Take a minute to click over to Jonny’s Patreon page and support his work. And share the comic on your social media feeds! 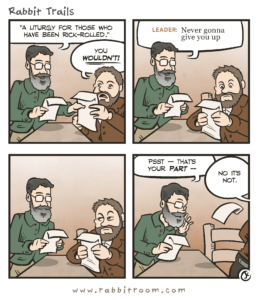