Release: The Mission of the Body of Christ

Way back in 2011, Rabbit Room Press was proud to shepherd into existence Russ Ramsey’s first book Behold the Lamb of God: An Advent Narrative. Over the past seven years, it’s been a joy to watch Russ grow and stretch his legs as an author—since that first book, he’s published his second and third (Behold the King of Glory, and Struck). Today we’re delighted to help him celebrate the release of his fourth, The Mission of the Body of Christ.

Today marks more than the release of a single book, though. This new book, in which Russ unpacks the events of Acts and the birth of the Church, is actually the third of the series that began with Behold the Lamb and Behold the King of Glory. Those books have been picked up and repackaged by the good folks at InterVarsity Press and today they are all available in a complete set called the Retelling the Story series.

We’ll have an in-depth review of the new book in the coming weeks, but you can pickup the entire series in the Rabbit Room Store today. 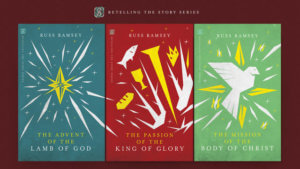 “God had not just sent his Messiah into the world. He had sent him to them. They were known. In all their guilt―intended and unintended―they were known and invited to find refuge in the grace of God, accomplished through the life, death, and resurrection of his Son. And the church continued to grow.”

Russ Ramsey’s dynamic narrative traces the journey of the early church with thirty-one daily readings through the book of Acts, as the people of God carried out Jesus’ mission as his ambassadors. This unlikely band of believers faced enormous challenges yet experienced God’s power and grace as they moved forward in the Spirit. Through this new community, a movement spread around the world that continues to this day.

Come discover the transformation that energized the early church. And you too can play your part in the unfolding story. The Retelling the Story series explores the narrative arc of the Bible from Genesis through Revelation in compelling language that is faithful to the text of Scripture. The stories are told afresh to help readers hide God’s word in their hearts by way of their imaginations.

[All three books of the series are available in the Rabbit Room Store.]