If you’ve been a Christian for a while, then chances are you’ve ended up in conversations about culture. At least, I know I have.

As a child and teenager, being “in the world, not of it” meant no rated R movies or secular music recorded after sometime in the 80s. (Thankfully, The Beatles and Simon and Garfunkel were fine.) As an adult, I realized there was no escaping the world, so I turned to examination and participation. I read books and articles about film, felt super-hip-and-edgy when I convinced myself to like Radiohead, and started noticing the little quirks that made up the American evangelical and homeschool cultures that shaped me.

It’s still fun to talk about these things. Chances are, you found your way to The Rabbit Room because talking about the intersections of faith, life, and art is exactly what we do. But are conversations enough?

“What is it, exactly, that we are called to do in the world? Are we called to ‘transform culture’ or to ‘change the world’? If we are to be culture makers, where in the world do we begin?” – Andy Crouch, Culture Making 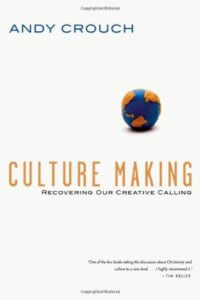 This summer, let’s explore those questions together. The Rabbit Reads Book Group returns August 6th with Culture Making by Andy Crouch, this year’s Hutchmoot keynote speaker. Originally published in 2008, Crouch’s in-depth exploration of culture offers a stirring challenge that has plenty to say to our world of 2018.

Laure Hittle and I will be your hosts as we discuss the meaning of culture, the role our Christian faith plays in it, and how we can make something beautiful and true of the world we’ve been given.

If you missed our previous reading groups, here’s what you can expect. For six weeks, we’ll read Culture Making together. Each week, we’ll share a reflection here on The Rabbit Room blog, then offer a up few questions for discussion in the blog comments. We’ll also set up a thread on The Rabbit Room Forums for longer conversations.

Culture Making is now available in The Rabbit Room store. Order a copy today, and we’ll see you on August 6th!