God in the Dark: Rilke’s Prayers of a Young Poet

I would like to beg of you, dear friend, as well as I can, to have patience with everything that remains unsolved in your heart. Try to love the questions themselves. 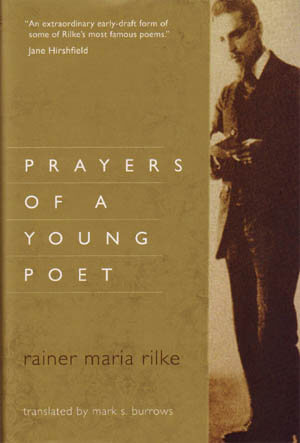 In the spring of 1899, a 24 year old Rainer Maria Rilke travelled to Russia for the first time in the company of his friends Lou and Friedrich Andreas. Rilke had had a troubled upbringing which he described in a letter as “one single terrible damnation, out of which I was cast up merely as out of a sea that is stirred to its depths with destructive intent.” After avoiding parental pressures to attend military school, he studied philosophy, art history, and literature in Prague and Munich, but never obtained a degree. In the interim he had managed to publish some reviews of art, literature, and culture, along with some plays, poems, and short stories. But when he went on that trip to Russia, something happened that influenced him profoundly as an artist for the rest of his life. Perhaps it had something to do with the fact that he was able to meet the famous Russian novelist Leo Tolstoy. Perhaps it was his encounter with the rites of the Russian Orthodox church. Whatever happened, Rilke encountered Russia as what he called a “spiritual fatherland,” and it sparked his true evolution as a poet.

Several months later, while visiting the home of Lou and Friedrich, he began working on a cycle of poems he called “the prayers,” which would later make up the first part of The Book of Hours, the first of his mature poetic works. In 2013, these initial poems were translated and republished in their early draft form by Mark S. Burrows as Prayers of a Young Poet (a nod to Rilke’s famous Letters to a Young Poet).

I first stumbled across Prayers of a Young Poet several years ago, and was captivated by the lines of prayer #2:

I live my life in widening rings
which spread out to cover everything
I may not complete the last one,
but I’ll surely try:

I’m circling around God, around the ancient tower,
and I’ve been circling for thousands of years—
and I don’t yet know: am I a falcon, a storm,
or a vast song….

That was about as far as I got. Last fall, I picked up Prayers of a Young Poet again. Early 2017 had brought on a bout of unexpected and severe depression, unlike anything I’d ever experienced, and along with it, a sense of spiritual darkness. There were many days when I wondered where God’s voice was in the midst of dark thoughts, or I cursed God for the silence. As I gradually emerged out of the depression itself, what then began was a time of spiritual deconstruction and reconstruction. It was in this space that I re-encountered Rilke’s prayers.

Prayers of a Young Poet are a perfect example of what Dorothy Sayers called the poetry of search versus the poetry of statement. For Sayers, search poetry is about exploration and groping, whereas statement poetry is didactic, teaching a lesson that has been learned.

Rilke is supremely a poet of search, as I found in Prayers of a Young Poet. This can be seen in the poem above, which describes him as “circling around God, around the ancient tower.” I also see this in another dominant metaphor throughout the prayers, one that fascinated me deeply, and that is God as ineffable darkness. Take for example prayer #3:

My God is dark and like a clump
of a hundred roots drinking silently.
I lift myself from His warmth;
more than this I don’t know, for all my branches
rest in the depths and only sway in the winds.

This sense of God as darkness and silence is also accompanied by a sense of yearning. From prayer #6:

You, neighbor God, when I sometimes
wake You with loud knocks in the long nights,
I do so because I rarely hear You breathing
and know You’re alone in the vast hall.
And when You need something, no one’s there
to offer a drink to Your outstretched hand.
I’m always listening. Give me a sign;
I’m very near.

Only a thin wall lies between us—
by chance; for it could be
that a cry from Your mouth or from mine—
and down it falls
without any noise or sound at all.

The wall is built up from Your paintings.

And they stand before You like names.
And when the light flames in me
and claims You in my deep,
it squanders itself as radiance upon their frames.

And my senses, which darken so soon,
are without a home and parted from You.

In saying, “The wall is built up from Your paintings” I believe Rilke is referencing the religious iconography he experienced while in Russia. Rilke seems to be suggesting that our very attempts to capture the divine can often be a stumbling block or a barrier to experiencing God. Translator Mark S. Burroghs suggests that the “prayers” reveal “[Rilke’s] desire to loose God from the conscious realm of the intellect, to seek the divine not through concepts or doctrines but rather in the experiences communicated in ‘the deep,’ by means of images and metaphors….We encounter this God in the ongoing experience of creation, and above all in the primal darkness that represents each new experience of beginning. ‘The dark of God’ is not sheer absence but is rather a gesture toward a presence we can ‘sense’ but cannot know: ‘Don’t let go of me with Your hands,’ he cries, ‘for I am night from Your night.’….Darkness allows for the emergence of this ‘second life’ in our experience; it is the place of every new beginning, according to Rilke.”

Looking back, I can see that this has been true in my life. Darkness led to the beginning of a renewal in my spiritual life that I now see was desperately needed. Old, bad ideas of God and myself had to be plunged into a dark abyss, in order for the Spirit to hover once again over chaos and wait for the quickening word.

I love the dark hours of my being,
for they deepen my senses;
in them as in old letters I find
my daily life already lived
in pious words, so soft and subdued.

From them I’ve come to know that I have room
for a second life, timeless and wide.