I can’t remember the first time I met Arthur Alligood, but early on in our relationship, I nailed a catfish to his dad’s back fence.

In Southern parlance, that may mean we grew up together, even though we didn’t. I’ve surely given Arthur pause like that a few times over the years, from when I fried said catfish in his kitchen, with his skillet—while he looked on in quiet desperation—to when I slept on his couch and left behind nothing but a knife. In return for these disconcerting forays into friendship, he has given me music that carried me through darkness like a coal car heading into the light.

If you’ll recall, Arthur started out with Formerly and Worship Circle Records and made his way through several independent projects. He released Under the Gray and One Silver Needle, featuring a filled-out sound and playing with folks like Leland Sklar and Jim Keltner. In and around these projects, he consistently returned to what seemed like the sonic home ground of a stripped-down acoustic sound. It fit rather perfectly. 2015’s The Shadow Can’t Have Me featured what felt like his most vulnerable tone yet. I knew he had been recording after that, but I hadn’t heard anything about it. Then I saw him when I was in town last year.

“I’ve been messing around with synthesizers,” he told me. “It’s going to be totally different.”

The record finally emerged in the middle of August, blossoming like a sudden flash of goldenrod on some country road. Different it is, indeed, yet it is completely and undeniably Arthur. Portage opens with a delightful paradox. The instrumentation is electronic, but the ambience of the song feels quite natural, reminiscent of a long, pensive hike up a lonely mountain trail. The lyrics themselves seem to look down onto life from a distance.

It’s us versus them, the good guys against the bad.
The bad ones are out of country or somewhere across town.
Out of sight, out of heart, we’d rather judge than understand.
We’re doctors plagued by blindness, the foolishness of man.

Where went all the wisdom?

“The Foolishness of Man” serves as a kind of preface. The curtain opens and we are walking together on this journey that we have chosen—or that chose us. The place we were before was full of turbulence that tortured the heart, but here is balm that says—at least, in one sense—that we don’t have to remain as we are. This is a record of pilgrimage.

I stand here on the shoreline. I will take the portage path,
‘Cause only love will end this hatred, the foolishness of man.

Perhaps it’s unsurprising that the music is haunted by echoes of wide, crystalline views—there was the recent Alligood family trip out west. Such things tend to have a profound and unaccountable effect on artists and their art. The first song even ends with a full cathartic minute of slow, melodic chord swells, wrapping us in one final embrace as we walk the trail into the unknown, led by some definite but hidden truth.

After bidding the world’s turmoil and nonsense farewell, much of Portage centers on the various joys and sorrows of walking the sojourner’s road. There are the moments of strength and steady headway near the beginning, such as in “Where the Sparks Fly Upward.”

I know what flame burns in the distance;
I know what fire calls in the night.
Out in the clear, covered up in mystery
I know the soul seeks till its finds.

Of course, as anyone who has backpacked can tell you, there are also times of numbness, of despair and deep ache.

Some break like twigs with a snap;
Some run like thieves, never turning back.
A coward is an easy find.
The mirror always shows me mine.

In this, Portage follows a certain narrative arc. There are the ear-worm tracks, leaning into pop sensibilities even while maintaining Arthur’s characteristic conversational delivery, but there is also the centerpiece “Since I Left to Go,” a track that asks a little more of the listener. It’s a confession, and like some of the imprecatory psalms, it doesn’t let up. In the context of the project though, it’s exactly where it needs to be. The whole EP is deserving of a committed hearing. Personally, I suggest you put it on repeat. Certain refrains are likely to emerge in your soul at a later time—probably just when you need to hear them most. I can see myself driving to work, reeling from having to discipline one of my kids or angry at my own wandering eyes. Arthur’s voice will surface like a corked bottle with a note inside. 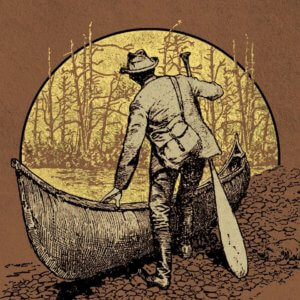 “You are more than your old mistakes,” it will say. “Join me. I won’t live in fear. I refuse.”

That the new project is based in an electronic sound does not exclude all things with strings. Well-placed electric guitars with just the right amount of distortion provide a great foil to the vocal on “Old Mistakes” and carry the progressions in “I Won’t Live in Fear.” “Since I Left to Go” makes smart use of the guitar-ukulele, giving the instrument a more orchestral voicing than ukuleles usually get. There are pianos and a bright hi-strung guitar. If anything, this setup makes me excited to hear this music live, given the possibility that there might exist two versions of each song—the album version and a single-acoustic rendition.

So many lines on Portage are truths I need to hear on repeat. I’m also excited for the second installment, whenever that comes out, but Vol. 1 will be seeing multiple plays in my house. I didn’t know I could get all this for nailing a catfish to someone’s fence. I’ll make sure to do that more often in the future.

You can pick up Portage Volume 1 here at the Rabbit Room Store.