The Helper Artist: An Interview with Greg LaFollette

Greg LaFollette wants his music not only to be beautiful and true, but to be helpful and useful. Over the past year, he has been writing church music with his own specific congregation in mind; in this endeavor, practicality has become a virtue of his craft right alongside aesthetic nuance. And the result is an album that is truly useful and beautiful, all at once. In fact, he just released it into the world on Friday the 26th. Read on to listen to one of the songs and learn about Greg’s journey towards the unification of utility and art.

Drew: The process of making your new record, Songs of Common Prayer, seems to have been very interwoven with your church family (Grace Story Church, Nashville, TN). How has your desire to be helpful within the context of that community informed your craft and creativity?

Greg: Well, I’ve worked in the music industry for almost fifteen years and contributed to probably a hundred records. In that span, I’ve made a few of my own singer/songwriter records, and while I believed in my art, I would always get to the point of releasing the music and find I didn’t have it in me. Something about that final step wouldn’t feel true or natural to me.

Realizing my lack of “the x-factor” that I so readily identified in the artists I worked with, I began to categorize myself differently. As a producer, I knew I could come beside artists to realize their creative visions; and as a touring musician, I was confident in my ability to fill in whatever gaps existed in a band—but that felt markedly different from being an artist.

I started working at this church a year ago and quickly realized that sharing songs that inspire honesty, vulnerability, self-awareness, and God-awareness is something that feels really true and natural to me. I discovered that I could make art and help people. It shifted my whole definition of what an artist can be. I’ve thrived since then, although I’m still coming to terms with being a two on the Enneagram (helper) while I really admire fours (artist).

Drew: Would you describe this as a shift from self-promotion to promoting others, then? Had you previously assumed that art by nature was always only used for self-promotion?

I started working at this church a year ago and discovered that I could make art and help people. It shifted my whole definition of what an artist can be.

Greg: I grew up with the idea that if you want to be virtuous and truly serve others, then the highest calling was to be the unheralded guy who shows up to church early to turn on the lights and set up the chairs. I mean, of course the pastor and worship leader are serving and helping, but they also get thanked after the service. The head trustee rarely receives a hand shake and nod of gratitude as the congregants leave. I’ve always aspired to be the guy who does the quiet, unnoticed, unappreciated work. So, in my reaction to the disproportionate attention they received, I often underestimated the virtue of the people who were up on stage leading the church. Sorry, everyone.

Drew: I do think there’s a cultural assumption there, though, that art isn’t primarily useful. Practicality and creativity have been divorced so irreparably in our imaginations that we assume the “useful” thing to do is get to church early to turn the lights on and the “indulgent” thing to do is to write a song and think people will be helped by it.

Greg: Yeah, and I think as I’ve gotten older I’ve been able to reconcile those two actions and motivations. I can now be supportive and serve in ways that involve my creativity and not feel uncomfortable. It helps that at a church plant, none of your work is liable to be over-glorified. The lack of pretentiousness helps ground everyone’s efforts in the community, whether it’s perceived as “creative” or not.

Drew: What has the learning process been like in the nooks and crannies of a community learning how to be together? You’re in this new pastoral role, especially new in the way you’re imagining and interpreting it. How have you grown into it among everything else in the church?

Greg: My story is a common one: I never thought I wanted to work at a church. I wanted to make music for the church and be associated with the church; but to actually work at a church somehow felt like a demotion. I don’t know where that untrue idea comes from, but it’s prevalent—I’ve listened to lots of worship leaders tell me that they didn’t embrace their role in the church until later in life, after pushing it away for a long time. But then they explain how liberating it can be to have a legitimate career and directly serve the Church.

It’s important to accept who we are and where we are in life. Today, I find myself being equipped for this and being placed in front of people who are willing to let me lead them. And I am so grateful for it.

In terms of my responsibilities, I have a lot of freedom to create for my church. If I feel like it would be helpful, I can write a song during the week and introduce it the next Sunday. I feel a great charge to be in tune with my people. As I’m choosing songs, I often ask myself two questions: What do we need? Where does it hurt? That’s where all the songs for Songs of Common Prayer came from.

It should be stated that not every song “works” the first time. Sometimes, after introducing a song to the church, I go home and shift the melody around to better fit our congregation, to encourage their participation. I love that because at that point, there’s a co-writing element introduced—I feel like the Church then owns the song as much as I do. All these expressions embody the life of our church—they’ve been written for particular people experiencing particular joy and suffering with a particular vocal range.

Drew: Similar to the misunderstanding that art can’t be useful, it seems to me that we are also prone to imagine songs as detached pieces of content floating around the atmosphere, rather than gifts to specific people in specific settings. What is it like writing directly to your church community, for these friends you know by name?

Greg: I want the kids to be able to sing these songs, but I also want the songs to have staying power. So I often land on meditative refrains that can get stuck in your head, but aren’t annoying like lots of “children’s music” can be. My writing process is really shaped by wanting to meet standards of usefulness. Nothing feels better to me than helping people gather together. 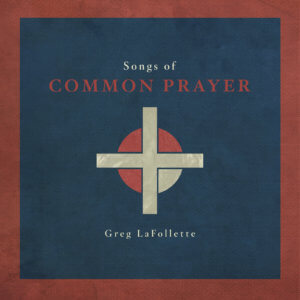 Drew: What are your hopes for Songs of Common Prayer as a recording that both transcends your own community and remains faithful to the particularity of other communities?

Greg: I’m actually in the midst of answering that question for myself, and I’m excited to share. In releasing the record, I’ve received offers to play concerts and lead services at various churches around the country. In a lot of ways, that’s of course what I want. But as I began to plan, I realized that there might be a way for me to use my gifts more effectively and, in turn, spend my time in a more life-giving, rewarding way.

So rather than doing a traditional tour, where I’m only in one place for a few hours of one night every year or so, I want to create a model where I can be something like an artist not-in-residence. I want to use the platforms that have been given to me to serve the Church by evaluating needs and trying to help.

Drew: So, something like a consultant for the disciplines of worship? It reminds me of how Andy Crouch came to speak at Hutchmoot this year: he observed us over the course of the weekend, and I could tell by his words that he had really gotten to know the Rabbit Room. His advice was unique to us and our calling. He was so passionate about it, and it seemed to mean a lot to everyone there.

Greg: Yeah, something like that. I want to spend time getting to know communities personally. I want to help identify needs and then join in addressing them. I want to be able to give that kind of gift, which I don’t think I can give if I tour traditionally.

Drew: And it’s so much more sustainable in the long-term, for everyone.

Greg: It definitely is for me. This sort of helping feels truer to who I am than simply scheduling a tour. In partnership, mutual inspiration, commonality, and friendship we can have meaningful interactions that lead to meaningful and lasting change. This is the way that I know I can have passion and integrity with how I move forward. I’m excited to see how God uses this vision.

Click here to listen to and buy Songs of Common Prayer.