Chances are, if you’ve been hanging around the blog, you’ve seen something about our new Podcast Network. Needless to say, we’re elated about this new avenue for sharing meaningful conversations—this network will be home to several promising podcasts, including The Artist’s Creed (bringing creativity into dialogue with the Apostles’ Creed), a best-of past Hutchmoot sessions compiled into Hutchmoot: The Podcast, and even The Membership, a podcast centering around the work of Wendell Berry (oh yes we did). Well, one of our new podcasts, led by Drew Miller, is called The Second Muse: How Songs Become Songs, and a new episode has released today.

The title of this podcast is taken from a Wendell Berry quote in which he references two distinct muses: the Muse of Inspiration, “who gives us inarticulate visions and desires,” and the Muse of Realization, “who returns again and again to say, ‘It is yet more difficult than you thought.'”

It is this second Muse of Realization with which we concern ourselves in The Second Muse, specifically in the context of songwriting and record producing. In each episode, Drew interviews a different artist along with their producer about a song that gave them a great deal of trouble, whether in the writing or recording process. Episode One featured Andrew Peterson and Ben Shive discussing Andrew’s song “Maybe Next Year”—in this newest episode we get to know another formidable artist-producer duo: Jordy Searcy and Lucas Morton. 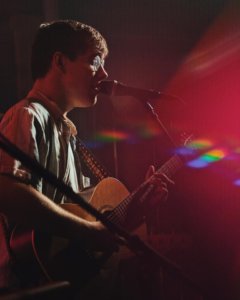 Jordy Searcy has graced us with his presence at two Local Shows here in Nashville, and in no uncertain terms, he brought the house down both times. He is an artist who seems to have it all: an outstanding voice (both literally and as an artist and writer), sharp lyrical wit, silky smooth guitar riffs, and the sort of stage presence that compels all within earshot to listen. His EP Dark In The City, thanks to the gentle and seemingly infallible musical intuition of producer and friend Lucas Morton, embodies Jordy’s punchy style with an ease and joy that is evident from the recordings.

This summer, Jordy and Lucas sat down with Drew to discuss the song that most quickly hushes any crowd: “Explaining Jesus.” Jordy reflected on the role spirituality has played in songwriting, Lucas described the way that their choice to record to tape influenced the final track, and all three discussed the instrumental components of the track, soloing various elements and commenting on them along the way.

You can listen to Episode Two of The Second Muse here.

Episode One with Andrew Peterson and Ben Shive is available here.

Check out The Second Muse on Apple Podcasts here.

And click here to visit the Rabbit Room Podcast Network.