A Fresh New Edition: Miz Lil & the Chronicles of Grace

When we met Walt Wangerin at the first Hutchmoot, we didn’t dream that nearly ten years later, Rabbit Room Press would be issuing a brand new edition of one of his most beloved books. And yet here we are.

Over and over again, I hear people list Miz Lil & the Chronicles of Grace as their favorite of Wangerin’s works. It’s a small book of short stories that recount Walt’s youth and the renewal of his faith while pastoring (and being pastored by) a small inner-city church. It’s a book of carefully chosen moments that build a powerful mosaic of sin and grace, loss and renewal.

Tragically, the book has been out of print for some years and has become scarce, so it’s with humble pleasure that we offer it back to readers in this new edition.

When Walt first asked us if we were interested in putting it back into print, he said he even had a couple of stories to add. In the end he found four. The new stories act as a coda to the main narrative arc and flesh out the community of characters in the book with quick yet bold strokes and, as always, Walt’s inimitable style. 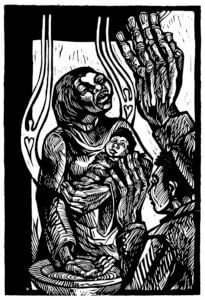 But even with four new stories, we wanted to do the new edition one better. We wanted it illustrated. And because so much of the book’s story takes place in the predominately African-American congregation of Grace Church we wanted the art to reflect that. We asked acclaimed artist Steve Prince to join the project and bring his unique gifts to bear on Walt’s stories. He graciously agreed. Steve’s passion and art springs from and nourishes inner cities and we couldn’t have dreamed of a more perfect match for Miz Lil. His images are earthy, chock full of symbolism, and unmistakably African American.

In the end, we’re humbled and amazed that Rabbit Room Press has had the opportunity to work with Walt and Steve, giants in their fields, to bring this book back into publication. It will be released on November 23rd, and is available for preorder today in the Rabbit Room Store.

One of Wangerin’s most beloved works, Miz Lil & the Chronicles of Grace leads readers on two parallel journeys: one a series of tales from Wangerin’s youth as he reveals his descent into human sinfulness, the other a chronicle of his awakening to the great grace of God through relationship with his congregation while pastor of an inner city church.

In this series of alternating stories, Wangerin’s staggering facility with language is at its most vibrant. Witty, sharp, rollicking, and unexpected, his prose crackles with life and hard-won insight. Characters like Miz Lil, Grandpa Storck, and Jolanda Jones are rendered unforgettable by his vivid writing and their unmistakable humanity.

Miz Lil and the Chronicles of Grace is a book shot through with emotional weight, and Wangerin’s steady hand carries us through the wasteland of the human heart and lands us squarely in the grace and mercy of God. 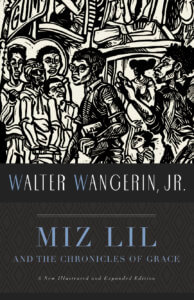