Cave Pictures Publishing is an ambitious new comic book imprint that offers a little bit of everything: a dystopian fantasy, a superhero team, a zombie saga, a wild west tale…and an adaptation of the classic George MacDonald fairy tale, The Light Princess.

I had not yet read MacDonald’s original story, but of all the comics in Cave Pictures Publishing’s new lineup, it was the title to which I immediately gravitated; the stunning illustration and design on the cover pulled me in. And the interior did not disappoint! This is a sparkling new adaptation that draws heavily from classic motifs and structures, yet defies convention and plays by its own rules—kind of like MacDonald himself! 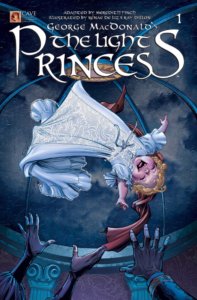 Meredith Finch’s earnest script elaborates on MacDonald’s original text, building extra story and serialization into what was a fairly short story, but it taps exactly the right sources: classic fairy tales and scripture, the same sources that fueled MacDonald’s imagination. The story’s original tone and themes are intact, but fleshed out with added texture for the artists to build upon.

And the artists are perfectly cast. Renae De Liz pencilled the book, creating the visuals for the characters and environments. Those pencils have a perfect sense of place, pacing, and momentum to guide the reader through the book, and Ray Dillon coated those pencils with a stunning layer of fairy-tale color and design, as well as some incredibly stylized lettering. The two artists make a great team, especially for a book like this. The story plays out against grand, elegant settings, splashed in gentle-yet-striking lighting and color that make it pop off the page. The resulting effect is deliciously atmospheric, whether we’re looking at a shining jewel of a castle or the grimy abomination of a witch’s tower. 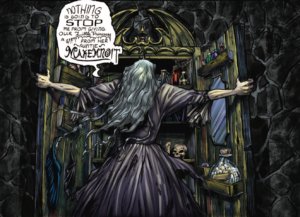 Reading the first issue of this series makes me excited to seek out the original MacDonald story and also to read the second issue as soon as it is published—and as far as literary adaptations go, that might be the ultimate combination.

The Light Princess #1 is coming in early 2019. Stay tuned to Cave Pictures’ website and social media for all the latest on their upcoming titles!