Truth-telling in the Dark

[Editor’s note: To celebrate the reprinting of Helena Sorensen’s Shiloh trilogy with Rabbit Room Press, we are sharing this delightful article by Jonny Jimison, first published in 2016. Enjoy, and consider picking up some of Helena’s books at our online store.]

I hope you’ve encountered the writing of Helena Sorensen—but if not, I want to introduce you to a trilogy of novels that strike me to the core: Shiloh, Seeker, and Songbird.

The Shiloh series is a thoughtful, lyrically written fantasy epic set in a land covered in a deep shadow, where the brightness and warmth of the sun is a wishful fable—and so is hope. Over the course of three books and several generations, we are introduced to the tortured Amos, the bold Isolde, and many other hunters and warriors, children and craftsman, including Evander.

Evander is a natural leader, taking his band of hunters deep into the woods to find food for the village, but he is also detached, set apart from them in ways that he can’t quite put into words.

Perhaps it’s born in him; his mother is one of the few in Shiloh who can dream.

At the end of a day of hunting, Evander huddles around a campfire with the other hunters. They defend against the shadow and the wolves by the fanning the flames of their fire and by making music.

“Another day has died
Another night descends, unyielding
No strength ta watch the skies
The breathless dark too heavy lies
And I must close my weary eyes
My fragile torch and lantern wielding”

There was quiet around the camp. The flames crackled. The embers hissed. One thick log split open and tumbled to the ground in two red-gold slabs. It was Lorne who spoke first:

“Was it yer ma, Evander? Did she teach ya that song?”

Evander thought. “She sings some of ‘er own, but this one, I think, she learned from ‘er mother.”

Lorne nodded. “I thought as much. I’ve heard it before.”

“She still sees them, then? These night visions?” Alistair asked.

“She sees lights?” Chase asked. The younger men shifted their weight, seeming as uncomfortable as Evander was with the increasing intimacy of the questions.

“Just one light, mainly,” Evander said. “The sun, she calls it. A great light that hangs in the sky, a light that burns away the Shadow.”

No one spoke at all, until Knox tossed a scrap of food into the fire and spat. “Visions like that would drive any man mad.”

Muscles tensed all over the camp. The hunters waited, stealing glances at Evander and glaring at Knox.

It took a moment for Evander to reply, but when he did, his eyes met Knox’s with a challenge. “It’s the darkness that drives a man mad.”

These Shiloh books are mighty dark stories, literally and figuratively. Vision is dim, death is always near, and the bleakness of the world seeps into characters like a poison. Even the happier moments are tinged with bittersweet longing. But for all their darkness, these are stories to reacquaint you with hope, because they tell the truth.

The truth, part one: the world is a dark place, and hope often seems lost.

The truth, part two: even when hope seems lost, it is the darkness that is doomed.

All it takes to kill the darkness is a little light, and beyond the shadow there is light overflowing.

We just forget it sometimes in the dark.

Some stories celebrate the darkness. The Shiloh series names it: darkness is the absence of light. Pain and shame and fear are the withdrawal symptoms of our deep longing—our need—for “a great light that hangs in the sky, a light that burns away the Shadow.”

Every shadow in the corner
forgotten by the daylight
where flecks of dust gather
and hide in secret
and every lengthening line
that draws trees on the street
on the opposite side of a horizon
going up in flames
holds in the weight of darkness
proof of light and presence.
—Shadows, from Ruins and Kingdoms by Jen Rose Yokel

I see this kind of message everywhere in great works of art, especially in The Rabbit Room community of artists and storytellers. Helena’s Shiloh series, Jamin Still’s paintings, Andrew Peterson’s songs—they are all beautifully crafted pieces of work that stir my soul and awaken a homesickness for heaven. They are windows to eternity in a dark world.

Take a look at this excerpt from my upcoming graphic novel, The River Fox: 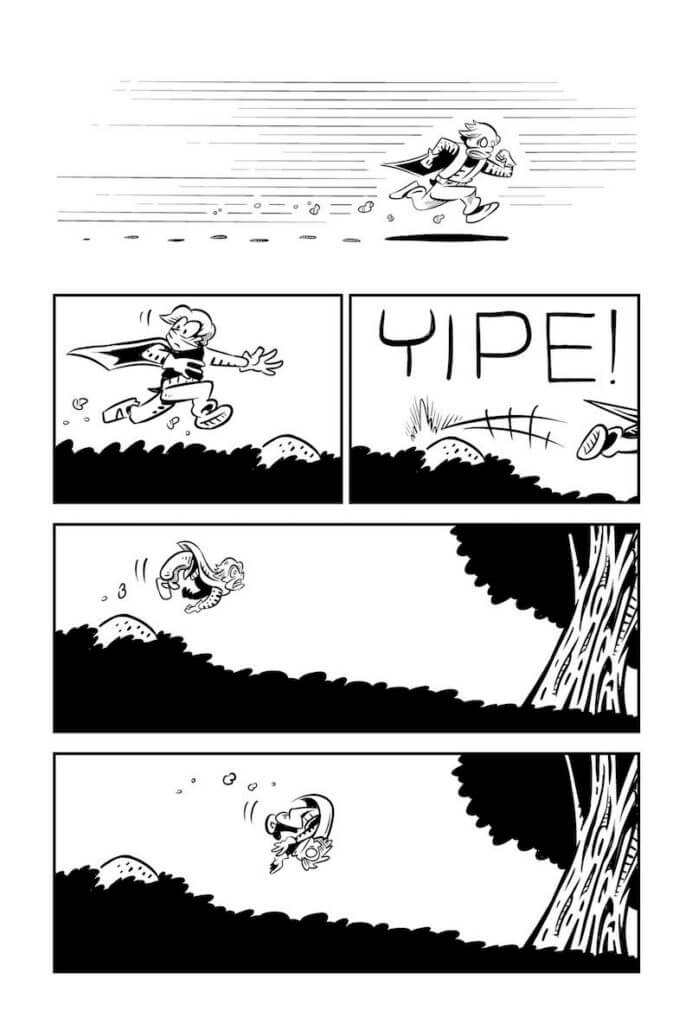 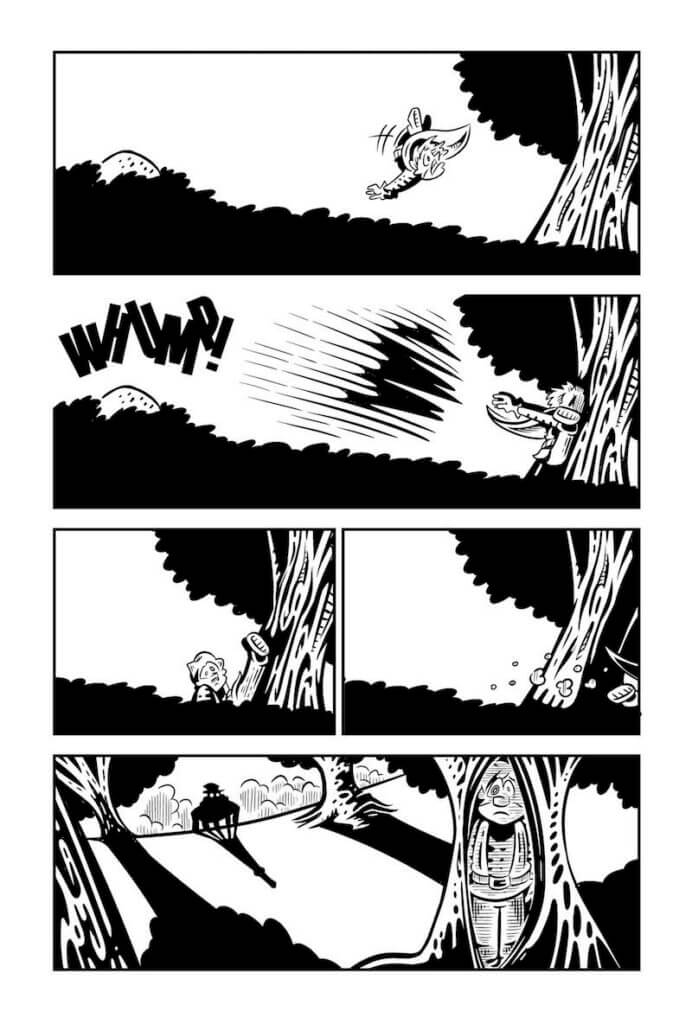 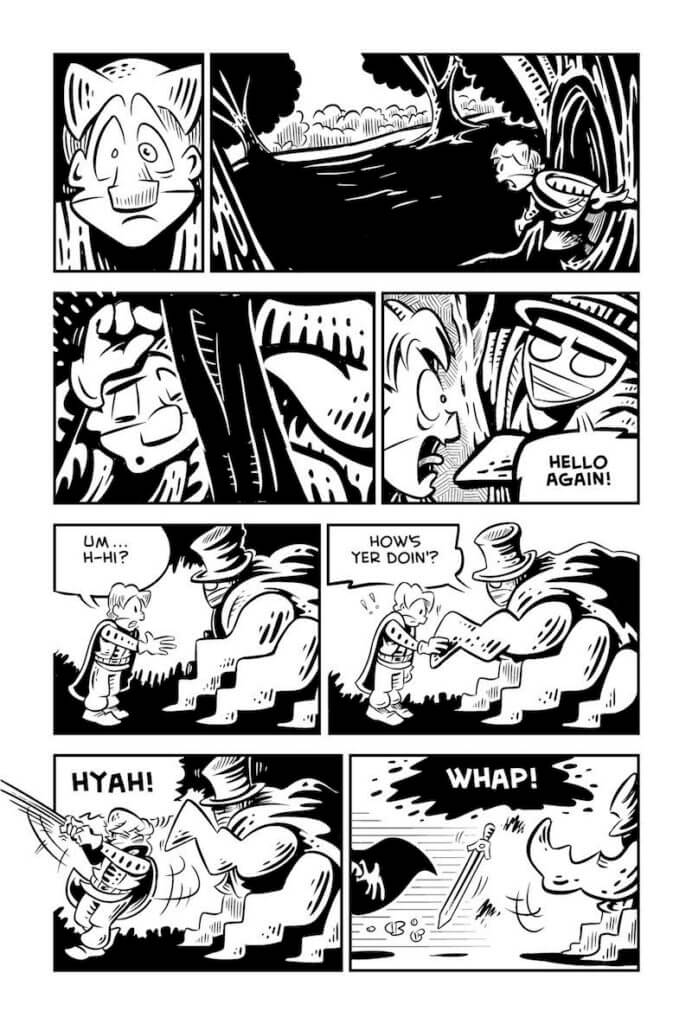 Yup. My love language is slapstick.

Despite my lifelong love of pratfalls and puns, this eager embrace of comic-strip humor is a new thing for me. Until recently, I saw my wacky comics as foolishness when compared to the delicate beauty of 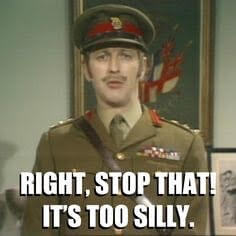 Jamin Still’s Ellen and the Winter Wolves or the brutal honesty of Andrew Peterson’s Light for the Lost Boy.

The Rabbit Room community changed all that, fanning the flame of my stories by affirming my heart for cartoony humor. My pride always told me that the light tone of my comics made them frivolous, but this community has helped me see how that light tone is an asset, a blessing—a gift from the Creator!

And what is art if it ain’t truth-telling?

And just because something is commonplace, or unheralded, or scary, or even just plain weird, doesn’t mean it isn’t true.

Sin and grace, absence and presence, tragedy and comedy, they divide the world between them and where they meet head on, the Gospel happens. Let the preacher preach the Gospel of their preposterous meeting as the high, unbidden, hilarious thing it is.

—Telling the Truth by Frederick Buechner

So let’s keep telling the truth.

Tell the truth in your doodles and symphonies and casseroles, in your woodwork and housework and yard-work, in your writing and teaching and performances and studies and vacation plans. Your truth-telling is a beautiful, essential part of the kingdom.

Keep telling the truth and know that this place is home. And when I say “this place,” I don’t mean just The Rabbit Room. I mean the Kingdom.

The darkness blurs our vision now, but it’s hopelessly—hilariously—outgunned!

Shiloh, Seeker, and Songbird are available in the Rabbit Room store.