Release Day Review: On the Edge of the Dark Sea of Darkness

Twelve years ago this month, Waterbrook Press released On the Edge of the Dark Sea of Darkness, Book 1 of Andrew Peterson’s Wingfeather Saga. I counted it a privilege to be allowed to write the Rabbit Room’s release day review of the book. At the time, the Rabbit Room was barely six months old. There was no Hutchmoot, no Rabbit Room Press, no Local Show, no Chinwag, no North Wind Manor. There was just the blog, with a small but very loyal readership.

In March of 2008, the Rabbit Room was just a little seedling of a dream that Andrew Peterson had planted in the world for mere love of things that are good, true, and beautiful. The Wingfeather Saga was another of those seedlings.

The Wingfeather Saga wasn’t what you’d call a blockbuster. It was more of a slow burn. The people who knew it loved it, but there are only so many seats in the blockbuster-making machine, and a lot of books that deserve to be blockbusters don’t get blockbustered. Through a series of events that I won’t detail, Waterbrook wasn’t able to continue the Wingfeather Saga beyond Book 2, and Books 3 and 4 ended up being released by Rabbit Room Press. But the people who loved the books kept loving them, and they kept telling their friends, and the slow burn kept burning.

The people who loved the books kept loving them, and they kept telling their friends, and the slow burn kept burning.

The seedling that was the Rabbit Room has become something more like a tree; birds can nest in its branches. And thanks in large part to the community that has grown up around here, the readership of the Wingfeather Saga has grown so that it does make sense for Waterbrook/Random House to re-release all four books of the Wingfeather Saga in hardback with new covers by Nicholas Kole and forty new interior illustrations by Joe Sutphin. Books 1 and 2 release today. Books 3 and 4 release later this year. So here’s to the Wingfeather Saga. And here’s to you, Rabbit Roomers, for your role in making this re-release possible.

Here’s that release day review from March 2008. I still mean every word of it.

Janner Igiby lives in Glipwood, a nothing little village in the land of Skree, on the edge of the Dark Sea of Darkness. Manhood is on the horizon, but Janner finds it hard to feel much hope for the future. Skree is ruled by foreign oppressors, snake men called the Fangs of Dang, servants of a shadowy emperor named Gnag the Nameless. The Skreeans are weak and weaponless. They’re even tool-less. Any Skreean who needs to use a hoe has to borrow one from the Fangs (and fill out the requisite paperwork). And from time to time, the Black Carriage arrives in Glipwood to carry young Skreeans toward an unknown fate across the Dark Sea. 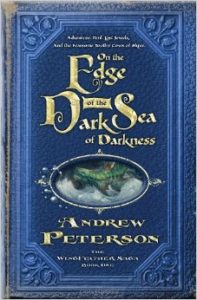 But once a year the Sea Dragons sing just off the coast of Glipwood. With their song, life reasserts itself in the hearts of Skreeans who have long since learned to numb themselves:

A middle-aged man named Robesbus Nicefellow, who had wasted his life balancing records for the famed button merchant Osbeck Osbeckson of Torrboro, decided that he wouldn’t spend another day working behind a desk; he had always wanted to sail. Mr. Alep Brume, who was sitting beside Ferinia Swapelton (proprietor of Ferinia’s Flower Shop), turned to her and whispered that he’d secretly loved her for years. Mayor Blaggus silently swore he’d never again pick his nose. All of the passion and sadness and joy of those who listened wound into one common strand of feeling that was to Janner like homesickness, though he couldn’t think why; he was a short walk from the only home he’d ever known.

A homesickness for a place he has never been. A nostalgia for a happiness he’s never experienced. The dragons’ song is a moment of otherworldly beauty and hope—of abundant life.

There’s something very big at stake here: you get the feeling that the Fangs would have a hard time maintaining their grip on Skree if the Skreeans heard this song too long or too often. And yet the song does its work on a small and personal scale too—in the realm of personal dreams, of unspoken crushes, of nose-picking. Such juxtapositions are the stuff of Andrew Peterson’s new novel, On the Edge of the Dark Sea of Darkness (Book 1 of the Wingfeather Saga). Here is a world where the everyday, the mundane is barely adequate to conceal deep longings that point to deeper truths.

It is altogether appropriate that Dragon Day is the day when Janner and his younger brother and sister defy the Fangs. It starts out as an accidental defiance, but its effects are profound and irreversible. The plot unspools from there. 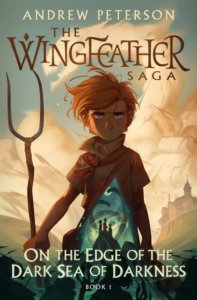 I won’t say much else about the plot, but I will say that the Igiby children discover things about themselves, their family, and their fellow villagers that they never imagined. They’ve always known that their grandfather Podo is a retired pirate; but, as they learn, that isn’t the half of it. Their mother, an unassuming householder, has a stash of treasure. And the father they’ve never known—they learn to know him too. Their wildest dreams aren’t wild enough.

In On the Edge of the Dark Sea of Darkness, Peterson has created a rich, strange, wonder-filled world that somehow manages to be homey at the same time. He has drunk deeply of Tolkien, and yet this is not a derivative book.

This book describes a world that is much bigger than the book itself. You get the feeling that Peterson isn’t telling all he knows about Aerwiar (that’s the name of this world)—not because he’s withholding, but because there’s so much to tell. In frequent footnotes and asides, he alludes to little details of Skreean life, customs, and history that don’t play a part in the story itself but add depth and texture, giving the impression that this is one of many stories one might tell about this world.

You’ve read tight, precisely structured books in which no sentence is wasted, no action is introduced without its equal and opposite reaction, no minor character is so much as mentioned unless he’s going to be significant before it’s all over. Those books have their pleasures, but they aren’t the pleasures you should expect from this story.

This story is wild and overgrown. I mean that as high praise. It has a well-built plot and beautifully drawn characters; it also has throwaway lines and rabbit trails. Picture a well-constructed grape arbor. AP has proven himself a skilled craftsman, building a solid and pleasing structure. He has also had enough confidence in his art to let the vine grow on the arbor-—lush and organic and not altogether manageable.

Life is busting out all over the place in this book, often expressing itself in ludicrous details. The bookstore in Glipwood has a category for “Books about Blacksmithing and/or Pie.” In the game of handyball, competitors try to score goals without using their feet, even to move. There is a statue outside town of a man enjoying his soup. The reader never finds out why.

By dwelling on the ridiculous aspects of The Dark Sea of Darkness (even the title is a little ridiculous), I don’t mean to give the impression that it’s a ridiculous book. It’s a deep, beautiful, satisfying book, and my heart is still full of it.

Ironically, the ridiculous touches make this fantasy story feel more real; experiencing Aerwiar for the first time is a little like experiencing this world for the first time, as a child. You’re not born knowing what’s normal and what’s ridiculous. So you’re forced to take a lot on faith. A pearl comes from an irritated oyster? OK, if you say so. But it sounds like you’re pulling my leg. And of all the crazy stories ever told about where babies come from, none of them is crazier than the true one.

As a reader of On the Edge of the Dark Sea of Darkness, you’re thrown into a ridiculous, wonderful world where there’s much more than meets the eye. Sort of like what happens when you come into this one. You can take it or leave it. For my part, I’ll take it.

Click here to view the new edition of On the Edge of the Dark Sea of Darkness in the Rabbit Room Store.

And click here to listen to Jonathan Rogers (circa 2008) read his review out loud for the Rabbit Room Podcast, now re-aired as a bonus episode of The Habit Podcast—including an introduction by Andrew Peterson (circa 2008) impersonating Alfred Hitchcock with relentless zeal and determination.